You are here:
Internet Marketing 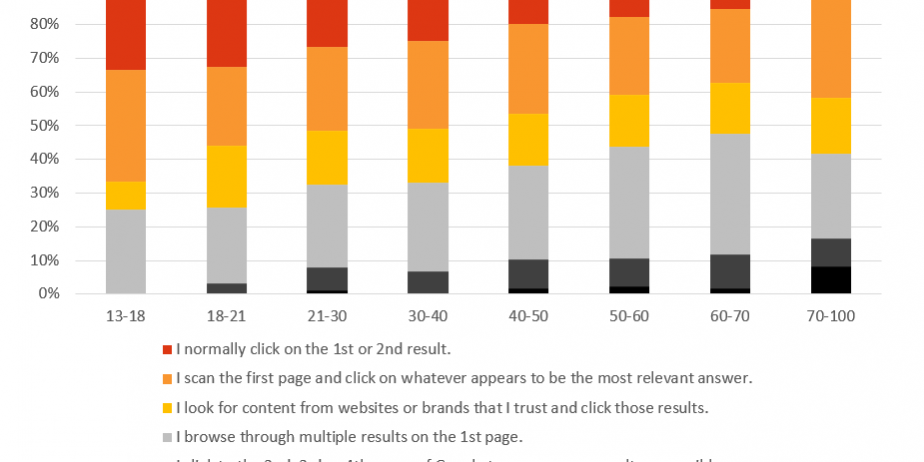 A new consumer survey about Google SERP engagement, from Path Interactive, finds organic search results still dominate user attention but younger searchers are more inclined to look to content in Featured Snippets and the Knowledge Panel without clicking through to third-party sites. This phenomenon has been dubbed “no-click” search results and is a worrying trend for many publishers.

The survey, which polled users from multiple countries (72% U.S. respondents), sought to determine how consumers today interact with the myriad components of the Google SERP. Lily Ray, the report’s author, and Path Interactive SEO Director, wrote, “We often hear about how the digital marketing community feels about changes to Google’s interface, but it is less common to hear the opinions of the average searcher who is less technically-savvy.”

Overall, the findings are not clear cut; they’re either reassuring or alarming depending on your perspective (and level of cynicism). Respondents ranged from 13 to older than 70, the majority of whom classified themselves as “somewhat tech savvy.”

Older users were more likely to look deeper or further than the top results. However, somewhat paradoxically, they were also less likely to discriminate between ads and organic links according to the survey.

Younger users were more likely to engage in “no-click” behavior when presented with Featured Snippets. Older users tended to look beyond Snippets for more information from other organic links. But nearly three-fourths (72.5 percent) of all respondents found Snippets trustworthy or semi-trustworthy.

Knowledge Panel and rich results. Responses were very similar for Knowledge Panel content. The overwhelming majority (92.1 percent) of searchers looked at Knowledge Panel results. Within that group, 55 percent continued looking at other links, but the remaining 37 percent said they “considered my search complete” with the Knowledge Panel — another no-click scenario.

Responses were also fairly consistent for rich results/answer boxes. Yet this time only a small minority (14 percent) felt the query was satisfied without further investigation. Another 43 percent used rich results along with other information on the page. And a surprisingly large 33 percent said they ignored these answers and focused instead on more traditional organic links.

Google criticisms. Asked whether they had any complaints about Google, 25 percent said they had none. Surprisingly, the remaining 75 percent offered varying criticisms, all provided in the form of multiple choice responses:

Why we should care. These survey responses reveal a range of attitudes and behaviors, often tied to age, in reaction to the various elements of the Google SERP. Younger users are less interested in ads but more inclined to be satisfied by the content at or near the top of the page — often without clicking on links. Older searchers click on ads but are more diligent in seeking out additional information, sometimes beyond page one on Google.

The results provide some ammunition to critics who claim Google’s Snippets, Knowledge Panels and other structured content discourage click-throughs to third-party sites. But that doesn’t tell the full story of user behavior, which is becoming more varied and more discriminating to some degree, as the SERP evolves.